How to Talk to Young People about Money & why it matters.

While experts generally agree that it's important to talk about money to children, study after study suggest most people are afraid or uncertain as to how and when to do it.

This hesitancy to teach young people about money, its value, its limitations, and its impact on their families' daily lives is understandable. Discussions can be tricky. For this reason, the idea of postponing, for as long as possible, talking about"financial realities" is attractive to many people. Unfortunately, while the natural instinct of any parent is to shield her or his child from "harsh realities," the issue of money is never too far from a child's experience.

Still, the idea that financial resources and realities of an individual parent or a family should be "kept from the kids" persists, as often noted by studies from the National Financial Educators Council and others. Clearly, this flawed notion needs to be revisited for the simple reason that money plays a critical role in every person's life. As noted in an article by "Wealth Matters" Paul Sullivan in the New York Times (How and When to Talk to Your Children about Money) "families need to approach these (financial) conversations with a plan and a willingness to listen as much as talk."

The two questions remain: How can we talk to our children about money when we are uncomfortable in doing so? When should parents begin these difficult "talks."

In her article published in Forbes, "How to Teach Your Children about Finances... at Any Age" author Liz Frazier Peck suggests introducing toddlers to rudimentary concepts of money through pretend stores and lemonade stands leads children to become more comfortable with personal finance issues as they reach adulthood.

In his article, Sullivan suggests that the beginning point of the conversation should be family stories. He further notes that these family finance stories work best when they stories aren't just focused on "joy and success." In fact, the notion of financial difficulties can also serve as life lessons, just as easily as stories of an aunt or uncle who achieved tremendous financial success due to hard work or prudent investing.

While family stories are powerful ways to introduce young people to financial concepts, such stories can also bring up issues that make a child uncomfortable. Stories of an aunt or uncle who "lost his or her shirt" on an investment may prove instructive, but may also cast an unfair shadow on that family member. A less direct but equally effective way to teach children about money is through fictional stories that are not directly descended from a relative.

It was for this reason that I created my Sideline Book Series. Rather than "dissing" a poor uncle for perpetually being in massive credit card debt to teach the dangers of compound loan interest, I chose to teach my children (and indirectly my students) the power and responsibility of money, using an 11 year old character who is the embodiment of a high functioning, fiscally responsible person.

I have found that through this form of "third person" storytelling, I am able to discuss many social, emotional and financial issues with my own children and my students without concern for casting aspersions on real people, perhaps even close relatives. My children and the young people who read the story of my 11 year old entrepreneur recognize that she is "heroic" because she works hard and understands that money is a means to an end, and not the be all and end all of a person's worth.

Of course, however a parent chooses to speak to his/her children about money, whether through personal stories of family members or through third person storytelling, the most important thing to remember is to introduce children at a young age to easily grasped financial concepts that can be built upon later on in life. In the end, helping children understand that things cost money and that hard work as well as short term delayed gratification have their benefits, will pay off with more fiscally responsible adult offspring.

10 Rules of Success for Entrepreneurs

What every Writing Teacher should be teaching

Tell Me What Happened

Tell Me What Happened

Now You Can Blog from Everywhere!

How to Talk to Young People about Money & why it matters. 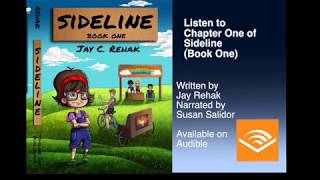 Listen to Sideline (Book One) Chapter One